The premise of Summer & Daniel’s Old Town Manor Key West wedding was a first for us! As a surprise for their guests, a tongue-in-cheek who-done-it murder mystery unfolded before their eyes.

The Atlanta couple was married on a beautiful late winter afternoon in the Old Town Manor gardens. They chose Pride as their theme for the celebration and decorated with rainbow colored paper lanterns and linens.

The grooms spent time together before the wedding in the Saratoga Suite at Old Town Manor.

Before the ceremony began, the couple and their wedding party took photos with their custom arch by Say Yes in Key West.

The wedding party gathered in Old Town Manor‘s lobby to review their roles in the murder mystery.

The couple waited and watched from the Old Town Manor front porch, and then walked hand-in-hand down the linen-draped aisle in the side yard.

Summers and Daniel’s wedding rings were passed through the crowd before making it back to the stage to seal the deal.

The ceremony was personal and heartfelt, with a good friend of the couple serving as the officiant and their wedding parties standing nearby.

Just when the wedding guests expected the ceremony to end, the officiant dropped to the ground as smoke filled the air.

The couple and their wedding party acted out a skit, including a song from the couple. The location of the body was traced with chalk for further investigation.

During a cocktail hour after the ceremony, wedding guests were encouraged to review possible murder weapons and submit their solution to the murder mystery.

Finally, the murderer was revealed.

Dinner was served by Catered Affairs of Key West at round tables in Old Town Manor’s back gardens. As the sun set, the garden lighting paired with colored lanterns provided a festive ambiance.

True to theme, the wedding cake by Cakes by Karol featured a rainbow colored center.

The grooms’ First Dance as a married couple under romantic lighting kicked off the dancing portion of this fun celebration.

The event was DJed by Kiss Me Entertainment.

This Old Town Manor Key West wedding was romantic, entertaining, and most importantly, personal. The couple’s personalities shone through from their wardrobe choices to their table centerpieces, and not to mention the theatrics of the murder mystery.

We wish them a lifetime of fun and happiness together.

Thinking about your very own Old Town Manor Key West wedding? Get in touch with us here. 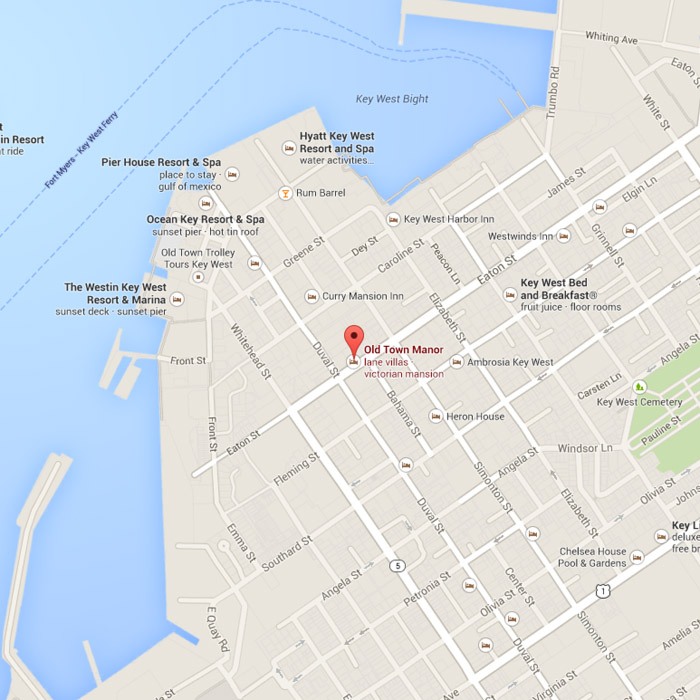